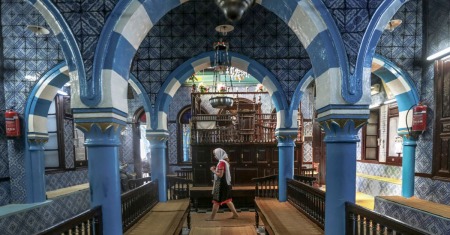 The first Jews came to Tunisia (then known as the roman province of Africa) following the first Diaspora in 586 BC. Hence, Tunisia can claim to have had a Jewish community since Roman times. Most of the Jews left the country in the 1960’s, mainly for Israel and France, leaving around 2,000 Jewish Tunisians today. Many Jewish landmark temples and sites remain today and can be visited all year round.
This tour will take you to monuments that are witness to more than 2,500 years of Jewish presence and tradition from Djerba to Tunis and La Goulette (where an important Jewish community remains), Sousse, Sfax, and Le Kef. A subtle combination of visits to some of the country’s numerous synagogues and other major World Heritage sites, from Carthage to the splendid roman site of Dougga..

After your arrival, you will be met at the airport and transferred to your hotel in Tunis downtown. An orientation meeting will be arranged at the hotel. Dinner and overnight at the Boutique hotel Tunisia Palace 4*.

After breakfast, we depart to visit the Bardo museum. This will help set the stage in learning about Tunisia’s history during Roman times.  We continue then to the sea side of Tunis where we will visit the legendary city of Carthage, the most famous of the ancient sites in Tunisia, but one in which historians find traces of Jewish presence. A visit will also be made to the nearby U.S. World War II cemetery, where you will have a brief lecture about the battles fought in Tunisia during the second world war. We continue to the nearby picturesque village of Sidi Bou Said, whose architecture was inspired by its Andalusian settlers. Return to our hotel. Dinner this evening will be at a restaurant specialized in Tunisian Jewish style cuisine. Return to Tunisia Palace hotel and overnight.

This morning departure from Tunis to the northwest, taking scenic country roads through this region of Tunisia that was not only the breadbasket for the Roman Empire, but also home to small Jewish populations until the early 1980′s. Upon arrival in El Kef (known under the French as “Le Kef”), you will get to see some of the historic aspects of El Kef, including a visit to a restored synagogue where you will hear about the former Jewish community of the town. From El Kef, we will drive to Dougga. Dougga is Tunisia’s largest Roman site. Covering some sixty acres, Dougga was known as the city of temples and its existence is thought to date back to the 4th century B.C. Following our visit to Dougga, we’ll head back toward Tunis, passing through Testour, which also had a small Jewish community. Late afternoon arrival in Tunis. The remainder of the afternoon and evening is at your leisure. Dinner tonight is independent. We will provide suggestions on dining options and how to get to them. Overnight in Tunis.

Today’s touring will be within Tunis, starting with a visit to the Jewish cemetery in Borj Ciel, providing some background on the Tunis Jewish community. We then visit Le Grand Synagogue in Tunis with a additional lecture on the synagogue and the local community. From the synagogue, we go to the historic heart of Tunis, the medina. Following a walking tour which will point out the historical and architectural aspects, you will have free time to wander around shops and alleyways within the souk. In the evening Shabbat dinner with members of the Tunis Jewish community. Ovenight in Tunis.

This morning is unstructured. For those who would like to attend Shabbat services at a synagogue, arrangements will be made to direct them to a synagogue that is in La Goulette, a suburb of Tunis. This afternoon, there will be an excursion to the south west of Tunisia, visiting the longest standing roman aqueduct in the world, as well as the roman site of Uthina. Dinner tonight in an interesting venue. Overnight in Tunis.

We depart the hotel to the airport for a flight to the island of Djerba. In the Jewish calendar, today is the 18th of Iyar, the beginning of the Jewish festival of Lag B’Omer. While the festival is not very celebrated in the West, among the Jews of North Africa, particularly Tunisia, this is a festive day celebrating the spring and a time to pay homage to prominent Jewish scholars in North African Jewish history. This afternoon you will mix with the Jerban Jews who participate in the day by joining in the procession of the community’s menara to the Ghriba synagogue, joined by literally thousands of Jews visiting the island from Israel, France and elsewhere. This is a day unlike other days throughout the year in Jerba, with pilgrims and indigenous Jerbans, both Jew and non-Jew participating. Unlike other activities throughout the year in Jerba, Jewish men and women both, participate in the frenzy of the pilgrimage. We will be able to witness and participate in the activities taking place in conjunction with the festival. The atmosphere around the Ghriba synagogue in the late afternoon becomes very carnival like. Speeches, song, processions and lots of festive activity will be taking place. Dinner will be at your hotel later in the evening. Overnight in Hotel Radisson Djerba.

We start the day with an island tour of Jerba. The island has a special character. We will have a walking tour of the village of Hara Kabira, the largest of the island’s two Jewish villages. Our visit to the “hara” will include seeing some of the village’s synagogues. Hara Kabira has nearly a dozen synagogues, most of which are still in use today. We will have the opportunity to visit the communal oven of the Jewish community and hear about the role it plays in the holiday and Shabbat meals, as well as hearing about the active role of Jewish education in Jerba, today. Our island tour eventually brings you to Houmt Souk, Jerba’s main market town and the location of many of Jerba’s Jewish merchants. After having a walking orientation of Houmt Souk and its souk, you may choose to spend some time exploring Houmt Souk independently, along with the option of enjoying lunch at one of the many seafood restaurants or you may return to our hotel to relax by the pool or ocean. The remainder of the afternoon is unstructured. Dinner and overnight at your hotel. Overnight in Jerba.

This morning we depart the island of Jerba and drive to the region of Matmata, a region known for its troglodyte, or underground dwellings. You will have an opportunity to visit one of these dwellings before heading north to El Hamma, also a site of pilgrimage for many Jerban Jews. From El Hamma, you drive to Gabes, an oasis town and once home to a small Jewish community. You will have the opportunity to go through the oasis by horse drawn carriage and learn about life within an oasis. From Gabes, you continue north with an eventual arrival to Sfax by late in the day. Overnight in Sfax at hotel Les Oliviers Palace 5*

This morning we start early with a visit to a synagogue in Sfax before driving northwest to El Jem to see the Roman coliseum, the largest of its kind in North Africa. El Jem also has a wonderful museum of mosaics.From El Jem, we drive to Kairouan. Kairouan is today, a rather provincial town. The city was founded and subsequently developed during early Islamic times, with Kairouan’s Great Mosque, dating from -the 7th century, reputed to be the oldest mosque in Africa. During medieval times, it also had a Jewish community whose scholars nearly rivaled those of Babylonia. Kairouan’s location along the caravan routes also provided a base for a flourishing crafts industry. The region still provides the base for much of Tunisia’s craft industry, particularly rugs and textiles.From Kairouan, we return to Tunis, arriving late in the day. Your hotel is in the sea side. This evening’s farewell dinner will be in a wonderful setting. Dinner and overnight in Tunis at hotel El Mouradi Gammarth 5*.

Transfers will be arranged to take you from your hotel to the airport for your return flight.

**End of the tour and our services**