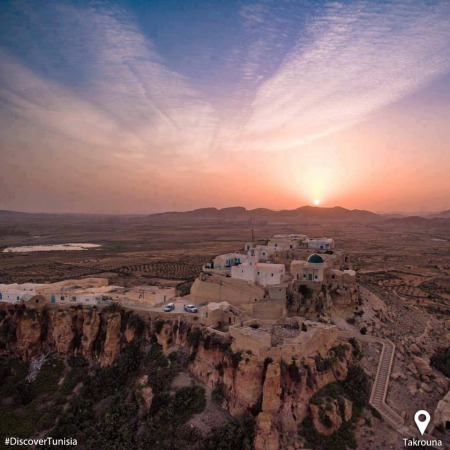 Takrouna: Takrouna overlooks the Gulf of Hammamet, Hergla, Sousse, jbel Zaghouan and Kairouan. This strategic location made it the field of several battles during the Second World War.
The village consists of stone houses whose architecture reflects the Berber construction methods: a small inner courtyard surrounded by vaulted rooms. Six families of Berber origin and the Gmach (Gomez) family from Andalusia (Andalusian emigrants in 1609) still live in Takrouna. The village is divided in four levels: the Gmach family live on the fourth level. As for the Berbers, they live at the bottom of the hill. The third level holds the mausoleum of Sidi Abdelkader built in the 13th century.
<!--[endif]-->

In the middle of the old town is a dedicated Zawiya Sidi Abdel Kader Jilani, founder of the Qadiriyya buried in Baghdad. This Zawiya, built in the seventeenth century, has been a very thorough restoration; it features antique architectural elements and played the role of Koranic school (maktab) for young children.

Zriba was deserted by its inhabitants in the 1960s, after the development of the new city in the plains.