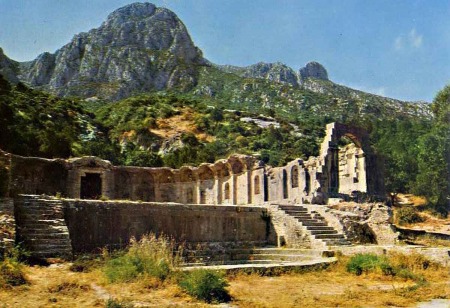 When Carthage grew in size huge quantities of water were needed, Zaghouan was the place that supplied the water from its natural springs through a 132 kilometer aqueduct ending in Carthage. Half way through from Zaghouan to Carthage is Oudna: an extremely promising site compared by archeologists to Carthage.

Zaghouan is one of the few small cities of Tunisia whose population has a unique and special character.

It consists largely of descendants of the expelled Moors of Andalusia, where Othman Dey established a settlement in the early seventeenth.
Well known, since antiquity, for its springs and its pure water, the Zaghouan region early became a source of water supply for Carthage but also an agricultural landscape structured by the wheat fields and olive fields’ terrain and the production of the chechia, the national headgear of Tunisia.

Oudna was a Roman settlement, better known as Uthina. Access from Carthage is by vehicle and this was also an airbase in the Second World War.

When you arrive in Oudna the one thing that will stand out is the magnificent amphitheater which is partly carved into the hillside. The amphitheater used to seat up to sixteen thousand spectators and is an impressive sight to see.

Other amazing ruins include the forum with its beautiful mosaics. There are also temples, vaults and bath houses scattered around this ancient city.

Wandering around Oudna will give you a true sense of what it must have been like living in Tunisia all those centuries ago. While excavation work is still being carried out, there are many of the ruins, cisterns and temples that you can visit and experience yourself.

Get a free quote !
Inventa Tourisme is a full service Inbound Tour operator, based in Hammamet, Tunisia. The company is a member of the Tunisian Federation of Travel Agencies (FTAV) and is fully bonded with the Tunisian National Tourist Office (ONTT). Inventa Tourisme was founded by a group of travel experts from Italy and Tunisia who have a combined experience of more than 40 years. Their staff is young, multilingual and graduates from universities of tourism & management.