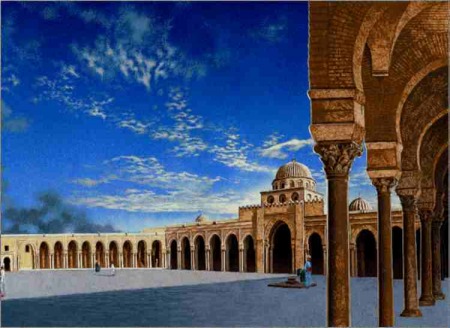 Kairouan: The first Muslim city built by Arab Muslims in the mid 7th century and known for the great mosque, the mausoleum of Sidi Essahib, the Aghalabitan water reservoirs, the Medina, the best carpets weavers, the Makroudh cakes from semolina and date paste and famous for being the city of the 100 mosques.

Sousse & Port El Kantaoui: Formerly Sousse was called Hadrumète. He was built at century IX, by the phenicians. Located at 130 km from Tunis, Sousse counts 110 thousand inhabitants. Pleasant city with a pretty beach, an Arab old city with ramparts and souks, a trade and fishing port and modern districts in seaside...

The Marina El Kantaoui made great strides unceasingly, growing since its construction in 1977. It is a marina, built, according to an architectural style arabo-Andalusian, with lanes, vaults, small places, houses imbricated, shops, restaurants and coffees.